Skip to content
OFFICE OF THE DEPUTY GOVERNOR OF IMO STATE
PRESS RELEASE
The Deputy Governor of Imo State and frontline Goververnorship aspirant, Prince Eze Madumere, has vowed to revamp ailing Health Sector and Social Welfare scheme in the State if given the mantle of leadership come, 2019, saying that the sectors, which are at present in comatose, need urgent attention backed with expertise knowledge for effective service delivery.
The Deputy Governor hinted this, yesterday, while commissioning the Alberta’s Foundation Secretariat in Owerri, the Capital of Imo State.
Prince Madumere lamented the level of decay in the sectors, which he said is affecting the living standard of the citizenry especially infant mortality rate, aged and other vulnerable members of the Society.
He highlighted  the importance of affordable health care delivery system, saying that its importance cannot be over emphasised and said that he already has a blueprint on how to give the people the required health care delivery.
Meanwhile, the Deputy Governor emphasised on the relationship between health sector and social welfare, explaining that they are interwoven, since they focuse on the well-being of the people with special focus on the less privileged.
If elected, Prince Madumere vowed to ensure that his administration provides functional health care delivery and social welfare scheme that will cater for the vulnerable in the society, thereby enhancing opportunities of improving their living standard and productivity level, saying only the healthy can be gainfully employed and productive.
Meanwhile, the Deputy Governor used the forum to shower encomium on the Chief Executive of Albertiqes, Mr. Gideon Asilonu for choosing to affect the lives of the citizenry  through his foundation, having provided structures and facilities to improve the living standards and education of Imo children.
He called on other members of the society who are also well-to-do to emulate this kind gesture, stressing that there is abundant blessings in giving.
Uche Onwuchekwa
Special Assistant to the Deputy Governor on Media
Photo news:
1&2: Imo Deputy Governor, Prince Eze Madumere, flanked by the CEO of Alberticques Foundation (left), Royal Fathers, Clergy among other dignitaries while cutting ribbon during opening ceremony of Albertiques Foundation Secretariate, Owerri, Imo State 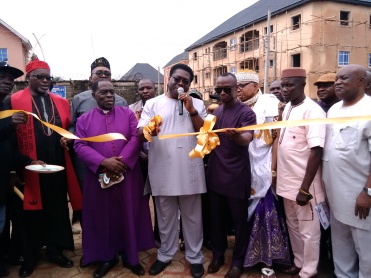