…Okorocha’s abuse of impeachment clause under 1999 constitution as amended, a call for concern. 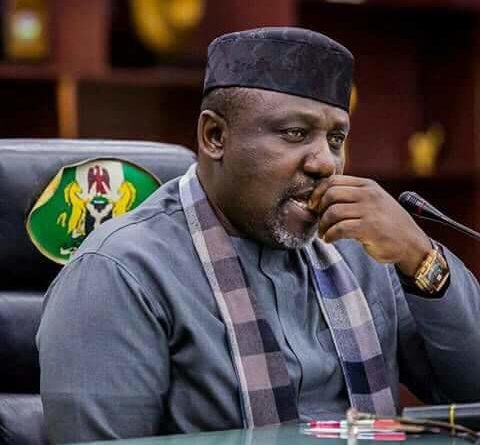 The beauty of democracy rests largely on inbuilt checks and balances. It also provides the latitude for the minority to have their say, while the majority has its way.

In theory, there is a separation of powers between the Executive, the Legislature and the Judiciary which constitute the three arms of government. However, in practice, what exists is inter-dependence.

Every democratic society has mechanisms that checkmate its leaders from becoming autocratic. This is in consonance with the words of Lord Acton that “Power corrupts, and absolute power corrupts absolutely”.

Nigeria, like most democratic societies, has one of such mechanisms and this is known as ‘’impeachment’’. Unfortunately, this mechanism almost broke the slender body of Nigeria’s burgeoning democracy between 2005 and 2007, when the process of impeachment was grossly abused. Today, Okorocha is working towards the same light.

The impeachment clause is a major weapon of check-and-balance in the Nigerian 1999 Constitution to check the abuse of enormous executive powers exercised and exercisable by elected functionaries of the executive arm of government the President, Vice President, Governors and Deputy Governors, who are shielded from prosecution from criminal and or civil charges (in their personal capacities) while in office as contained in the provisions of section 308 of the constitution. From legal statutory interpretation point of view, it is instructive to note that the provisions of section 308 is meant to protect the aforementioned office holders from frivolous litigations that could otherwise distract them from focusing on proper governance. It is not and would not have been the intention of the framers of the constitution that the executive office holders should hide under the immunity clause in section 308 to commit crime against the citizenry and the state in any manner whatsoever (yet Okorocha has done worse than this and left to roam about freely). Neither would it have been the intention of the constitution to shield executive office holders from legal repercussions where issues of gross misconduct tantamount to treason contrary to provisions of section 1 (2) of the constitution is involved. As a check-and-balance against abuse of power in the normal course of governance, the legislature is empowered under section 188 of the constitution (in case of Governors/Deputy Governors) and section 143 (in case of President/Vice-President) to remove such an erring political office holder covered by immunity against prosecution of any kind under section 308. It then follows prima facie that for the affected political office holders to face prosecution, they would have to be first removed from office by the legislature (with a theoretically stringent two-thirds majority of all members of the legislature) in accordance with provisions of sections 188 or 143 of the constitution as the case might be. To give adequate power to the legislature to serve as proper check on the executive arm of government through the aforementioned constitutional provisions, sections 188 (10) and 143 (10) state that the legislative process leading to impeachment are not justifiable, that it is not within the competency of the court to intervene. The provisions of sections 188 (11) and 143 (11) state further that what constitutes a gross misconduct warranting impeachment is a violation of the provisions of the constitution or whatever so amount to gross misconduct in the opinion of the legislature. From the foregoing, it is clear that the impeachment process is not meant to be subject to any judicial veracity of the alleged constitutional breaches and or gross misconduct. While the truth of such impeachable offences may not survive the test of normal judicial trial in a court of competent jurisdiction, the process is arguably meant to serve a political antidote to an omnibus shield provided the political office holders under section 308 of the constitution. Despite obvious potential checks provided in sections 188 and 143, evidence of plundering of state funds and even commission of heinous crimes such as murder by political office holders who enjoy immunity under section 308 have been elicited by the report of State Security Service (SSS) and Economic and Financial crime Commission (EFCC) in various reports that have been made public at various level of government in recent time.

Between 2005 and 2007, five governors were impeached by their State Houses of Assembly. The only unifying factor of these impeachments was that none could be said to have followed due process. They were all removed without having regard to constitutional provisions. Why then has Okorocha’s case been a hard nut to crack despite his continuous disregard for the law and due process?

Section 188 of the 1999 Constitution provides for the removal of governors and their deputies. This latter section is a replica of section 170 of the extant 1979 Constitution under which Alhaji Balarabe Musa of the defunct People’s Redemption Party (PRP) of the old Kaduna State was impeached by a House dominated by the also defunct National Party of Nigeria (NPN). He was the only executive Governor removed under that constitution.

Therefore, reckless legislatures have harped on this inadequacy to impeach on frivolous grounds. The case of Prince Eze Madumere of Imo State is an evidence of this rascality. Therefore, the constitution has put the executive at the mercy of the legislature because the latter can in its own opinion manufacture what amounts to “gross misconduct”.

For example, The United Kingdom that colonized Nigeria utilized the impeachment process until 1795 when Warren Hastings was impeached. Since that time, the impeachment process has no longer been in practice and the country has developed what is known as “passing a vote of no confidence” on any public officer who has committed an offence serious to warrant such a fundamental decision. These processes mentioned above have been sparingly used by the United Kingdom; it only resorted to them when it was absolutely necessary.

Another interesting country is the United States. This is so because of the political and constitutional nexus that exists between Nigeria and America. In this country, impeachment is not only limited to the president and his vice, governors and their deputies but to all civil officers – they could be senators and judges as experience has shown.

Since 1787 when the United States Constitution became operative, only thirteen officers have so far been impeached. This underscores how Americans guard this provision jealously to avoid political instability. It is only resorted to when other avenues have become practically impossible.

The recent submissions of the Governor of Imo State, Owelle Rochas Okorocha, before the State House of Assembly, which indicated that his Deputy Governor, Prince Eze Madumere be considered for immediate impeachment and investigation for corruption is a reference point of the decadence in our political strata which should have been ameliorated by the various legislative assemblies. But what do we have? – False Accusations upon accusations and intimidation from the guilty one, Okorocha himself and yet the law has refused to call him to order or impeach him in place of his Deputy.

On Monday, 10th of July, 2018 the deputy speaker, Nnanna Ozuruigbo submitted a petition signed by 13 out of the 27 members of the Assembly, accusing the Deputy Governor, Prince Eze Madumere, of abandoning his office for more than three months without permission, refusal to carry out official duties assigned to him by Governor Rochas Okorocha and most importantly, the accusation of being Unqualified to be a public officer on the grounds that he was once an ex-Convict in the USA. All these purported lies from the same Owelle Okorocha, who has been known for his numerous excesses in the use of power and defilement of law and order.

In Nigeria, Since most of the affected political office holders have a firm grip on their political environment (including party machineries) it has been practically impossible to invoke the impeachment clause to sack such erring office holders like Okorocha and make them face prosecution, which is why he is still pocketing and bending the laws without any form of fear or respect. Okorocha’s seemingly ‘larger than life’ political aura wielded by the state chief executives is a major reason for the continuous impediment on political expediency and efficacy of the constitutional provisions.

Governors who are alleged to be involved in massive lootocracy of the treasury are supposed to be brought to book by the provisions of the 1999 constitution but today the reverse is the case as our lawmakers have now become tangential partakers in the corrupt enrichment of self through the little amounts doled out to them by the governors under the guise of “constituency projects” that were never implemented, rather than the fight for justice. This trend, which started in Bayelsa state, is the same scenario being played in the on-going impeachment saga in Imo state. As much as it is a standard practice in criminal justice procedure for the prosecution to engage in trade-off to tactically obtain the cooperation of a co-accused, accessory or secondary parties in the trial of indictable offences with the resultant effect of turning such persons into witnesses (with their protection and freedom guaranteed in return in order to secure conviction of the main culprit) the current approach adopted to rein in the lawmakers to perform their constitutional and oversight duties raise some pertinent questions deserving critical analysis on the efficacy of the rule of law in the Nigerian nascent democratic experience of the last seven years.

Some of the jurisprudential issues arising are encapsulated in the following rhetoric:

1)    Where lies the efficacy of the federalism professed in section 2 (2) of the 1999 Constitution?

2)     Does State Assembly lawmakers require external promptings to undertake their constitutional  duties of checking the governors as spelt out in section 188?

3)     If the EFCC induces impeachment proceedings (overtly or covertly) against erring Deputy Governors, who then induces such proceedings against a defaulting Governor where necessary?

Ordinarily, the state assemblies and the National Assembly (NASS) need no overt or covert prompting or inducement from outside to initiate impeachment proceedings against the elected officers covered by the immunity clause in section 308 (3) of the 1999 constitution. The question that no plausible answer has been found to is “if the influence of federal government controlled security apparatus is borne to sanitize corruption at the state level (with or without trampling on the principle of federalism), why then has the case of Imo State become different?”. The provisions of sections 188 and 143 of the constitution are unambiguously clear; “it is the prerogative of the lawmakers”. Where the lawmakers remain insensitive to rise up to the occasion, nonetheless accusations and counter-accusations against the political office holders where then lies the proper practical check against the executive office holders?

While it is good to protect elected political office holders from frivolous litigations and witch-hunting while in office, our experience in the last seven years has shown the need for Governor Owelle Rochas Okorocha of Imo State to be cautioned for his excesses especially the recent move to impeach his deputy and also it is of utmost importance that Owelle Okorocha should be arraigned for Money Laundering, Gross Misconduct, and Abuse of Power.