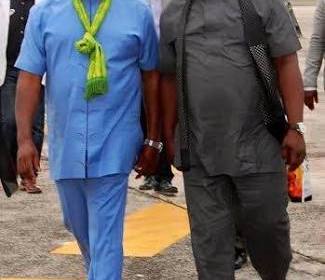 Prince Eze Madumere, the Deputy Governor of Imo State has reiterated his resolve to live and die with Rochas, adding that the Governor remains his Leader, mentor and role model.

The Deputy Governor made the declaration while receiving the Executive members of ‘Rochas People’s Movement’ led by its Chairman, Rev. Simeon Nwaulu when the group paid him courtesy visit in his office.

Prince Madumere described Rochas People’s Movement as a major structure for Rochas Okorocha which according to him has done many exploits in the past, even as he commended the leadership of the organization for spreading to all the States in the South-East and South-South.

He charged the Executives of the organization to galvanize their members for the on-going APC membership and re-validation exercise, adding that the party is already making progress in its agenda to rebuild Nigeria and put it on a solid foundation.

Pledging to support the group, Prince Eze Madumere charged the executive to reconcile aggrieved members of the organization which according to him would ensure peace and progress of the organisation.

Earlier in his remarks, the leader of the group, Rev. Simeon Nwulu described Prince Eze Madumere as humble, loyal, role model and epitome of good administrator, who has used his wealth of experience in supporting Owelle Rochas Okorocha to build a better Imo State.

Nwulu said the group is happy with the activities of Prince Eze Madumere, adding that Rochas Peoples Movement has completed all necessary arrangement to honour him with the award of the best Deputy Governor in Nigeria.

He pointed out that the exemplary life of Prince Eze Madumere has shown that Owelle Rochas Okorocha has planted and produced a tree that will yield good fruits.
Nwulu said that the organization is on a mission to capture the South-East and South-South for APC, even as he solicited the support of Prince Eze Madumere.

High point of the event is a presentation of a sculptural piece to Prince Eze Madumere by the group which signified according to Rev.Nwulu Imolites’ desire to explore Madumere’s innate leadership qualities while thanking Governor Okorocha for choosing a right deputy that is loved by all.

Uche Onwuchekwa
Special Assistant to the Deputy Governor on Media

2. Imo Deputy Governor, Prince Eze Madumere in a group photograph with the members of ‘Rochas People’s Movement’ when the group paid him a courtesy call in his office yesterday in Government House, Owerri, Imo State